How Do Influencers Impact Our Choices and Language? (…and Twitter Bingo)

If you’re on Twitter and follow influential brand marketers, leaders, strategists, agencies, and consultants, you’ll see something interesting develop in your newsfeed. Someone writes about a topic or shares a new term, and pretty soon you see it spread like wildfire. Suddenly it’s everywhere - even your boss is saying it in a department meeting.

A team of USC researchers recently coined the term “majority illusion,�? referring to the social media phenomenon that occurs when members in a social network perceive that a concept or product is more popular than it actually is because of a disproportionate number of people in their local network talking about it.

Why is this important? This bias can cause people to reach wrong conclusions about how common a behavior is - meaning that they’ll accept as norm a behavior that is actually fairly rare globally. Things become “contagious�? because people observe others adopting the behavior and then choose to do it themselves, which then influences others to do the same.

Well-connected folks can cause things to take off, hence the up-and-coming trend of influencer marketing. If a brand marketer can find the right folks to talk about their product, then they can potentially influence customer choice in their favor.

And it’s not just the size of a person’s network that makes it possible to set things afire – the structure of their network matters, too. When you want to get the word out quickly and create some buzz, then you need well-connected influencers whose connections cross various networks, making them efficient at spreading information.

Malcolm Gladwell said it well in The Tipping Point,

“We are actually powerfully influenced by our surroundings, our immediate context, and the personalities of those around us…. Simply by finding and reaching those few special people who hold so much social power, we can shape the course of social epidemics.�?

We’re not sure who we have to thank for these popular buzzwords, but you can't check out your newsfeed without running into a number of them in short order. If you want to play along, see if you can get a BINGO on Twitter or LinkedIn… 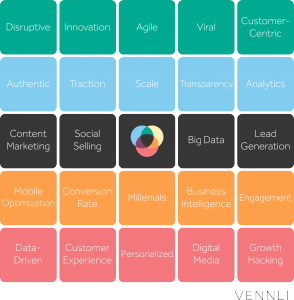 "Place" and How Tesco Leveraged It in Digital Fashion