Let Go of the “True but Useless�? and Focus on Critical Decisions Impacting Growth

People always want the big moments. The big strategy, the home run, the presidential election. But the real power lies in the everyday, and real change depends on harnessing the small, critical moments behind behavior – the moment of decisions.

In the 90s, Jerry Sternin of Save the Children was tasked with reducing childhood malnutrition in Vietnam, and he was only given six months to do it. While this may have seemed an impossible feat, he knew he simply needed to find the right way to influence the decisions impacting nutritional behaviors.

Malnourishment affected nearly half the children in Vietnam due to a convergence of poor sanitation, inadequate educational system, lack of food distribution, poverty, and lack of access to clean water. In just six months, Jerry knew that he was unlikely to impact any of these large roadblocks. He called these “True, But Useless�? (TBUs). He couldn’t tackle these insurmountable TBUs and expect any meaningful change – he needed to identify something smaller, something he could impact.

Jerry went straight to the villages and the people who made the most important decisions about children’s health: mothers. He looked for what he called “positive deviance.�? If half the population is malnourished, he reasoned that the other half was doing something right.

Sure enough, in every village he found some mothers that had found ways to feed their children more effectively despite having the same constraints everyone else had. Jerry observed how these mothers fed their children.

Themes appeared. The well-nourished children were fed smaller meals but more frequently. Their parents helped them eat instead of simply placing food out. Well-nourished children also ate even while afflicted with diarrhea, contrary to folk knowledge that prescribed fasting for sick children. However, the greatest difference was that these mothers gathered small shrimps, crabs, and field greens from the rice fields and incorporated them into the rice. These added vital nutrients and protein to the children’s diet – marking the difference between starving and healthy kids.

This story, as told by Chip and Dan Heath in Made to Stick, illustrates the power of choice and decision makers – and harnessing this understanding to impact change. Sternin called these women who made different choices with positive results within the village community positive deviants (or, as Heath and Heath call them, “bright spots�?). Learning from the most effective decision makers and identifying how to influence choices can result in remarkable and meaningful change.

Jerry and Save the Children developed a mother-to-mother communication program to share these best practices - starting in one village and then quickly spreading to others. The initiative saw incredible results, and continued even after the Vietnamese government forced Sternin to leave. Over the next two years, the sharing of these simple methods led to a 65-85% drop in malnutrition. Eventually, the program reached 2.2 million Vietnamese people in 265 villages, and Save the Children has improved nutrition rates using similar methods in over 20 countries.

This case study is a dramatic and important illustration of finding solutions by seeking those who have creatively solved difficult problems where others have not. But there is another lesson as well. It is the idea that big solutions come from thinking small - from getting down to the level where a choice is being made.

In seeking to understand problems related business growth, managers often cite overall structural changes that seem to hamstring the organization: changes in the political or legal environment, competitive or cultural dynamics, etc. They try to understand growth at the level of overall industry and geographic market.

A McKinsey Quarterly article pointed out that it is difficult to fully understand growth at such a high level. We should begin not at the top but at the bottom: by exploring the decision-making and “moments of truth�? for individual customers in specific situations. That’s where we get inspiration for growth strategy that really drives differentiation by providing unique value to customers.

If Jerry had tried to tackle the big “TBUs,�? if he’d gone for the home run instead of the small ball, he would not have been as effective. By finding a small, targeted solution focused on impacting the choices by key decision-makers, he and his team created radical, meaningful, and lasting change.

In your own strategy discussions, are you focused at the “True but Useless�? level, or are you zeroing in on how to impact a specific choice – thereby developing actionable solutions to impact change? To learn more about how to focus at this level to achieve business growth, check out Driving Growth With 9 Words (And A Picture). 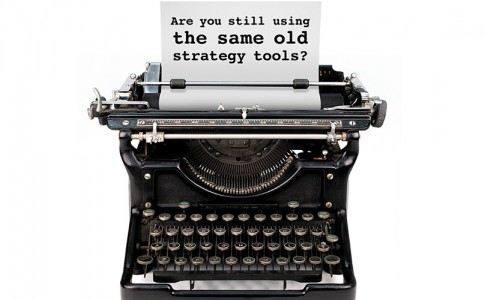 Stop Using Your Grandma’s Strategy Tools – Evolve with Your Customer