"Place" and How Tesco Leveraged It in Digital Fashion

"Place" is an element of the classic four P's in marketing (product, price, place, and promotion), more commonly referred to as distribution. It refers to the methods, strategy, and structure an organization executes to get its offerings to market and into customers’ hands.

It’s the least sexy "P". As a professor of marketing, I can tell you distribution is not the most exciting topic to students. Despite the fact that distribution creates enormous value in our economic system, "place" just does not match the glamor, glitz, and visibility of advertising and new product innovation in the discussion of marketing.

However, distribution is so fundamental to the marketing system that it tends to dominate the other 3 P’s when it comes to impact.

My Notre Dame colleagues Bill Wilkie and Betsy Moore find that the earliest writing in the field of marketing (dating back to the early 1900’s) was focused almost exclusively on distribution, describing the evolution of systems to move goods and services from producer to consumer.

Why? It was fundamentally the most important thing. Creative distribution strategy could produce a big competitive advantage in access and open up entirely new markets.

Today, we are spoiled by a very sophisticated wholesale and retail distribution system that we often take for granted. But behind the scenes, distribution accounts for a massive amount of value in our economy.

Let’s compare with other P’s.

The significance of "place" is also illustrated very tangibly in an important study by Duke University's Carl Mela and colleagues, published in 2008. These authors asked a simple question that required a complex model to answer:

Which elements of the marketing mix (product, price, place, or promotion) are the most important for the growth of frequently purchased consumer products over time?

Using five years of data covering 25 product categories, they found that feature/display advertising accounted for 20% of the long-term growth of brands. Other marketing mix factors involving advertising, price discounting, and product-line length each accounted for 7% or less of growth.

But hold on to your hats. Distribution breadth - the percentage of stores in the market in which the brand is distributed - accounted for 54% of long-term brand sales growth.

Place as Access: Tesco’s Innovation Began with the Customer

So, there’s little doubt that "place" has huge value economically. After all, customers must have access to your product in order to purchase it.

But what if your physical distribution network is constrained by space and investment?

That was the case for Tesco, an internationally known retail grocer facing an interesting competitive challenge in South Korea. Tesco found itself at a significant disadvantage in terms of the accessibility of its stores. The number one player in the market had almost double the number of retail outlets.

It’s not uncommon for firms to assume that distribution – and the value it may create for customers – is fixed. This assumption comes out of a commitment to various channels and locations and the challenges of making a significant change in the short-term. The status quo can be a strong force, and entrenched thinking often prevents the search for new ways to deliver customer value via “place strategy.

But Tesco overcame these challenges and did not limit its search. Instead, it began a quest for growth by focusing on understanding the customer purchase decision and the consumption journeys of South Korean consumers. The country has an exceptionally busy, ambitious working culture. Many (especially younger) consumers have active careers and work long hours with extended days bookended by commutes on public transportation.

What Tesco learned was that grocery shopping was a chore that had to be squeezed into busy weekends or exhausting late-night trips to the store. Considering the growing use of mobile phones for consumption-related activities in South Korean society, the Tesco team came upon a simple yet incredibly powerful idea: create “digital stores in train stations and other public places where there customers already are.

They put up printed pictures of products on store shelves on the walls in mass transit stations that included UPC codes, representing a large number of staple categories.

Consumers are able to “shop with their phones by scanning products they want, paying, and then scheduling delivery of their purchased items to their homes.

The results? Tesco had over 10,000 visits to the website initially and a 76% increase in the number of new registered members. Online sales increased 130%. The company has become the top online grocery retailer in the country and has jumped to a close second in overall sales compared to its top rival.

As the Venn diagram below demonstrates, Tesco effectively moved the benefit “accessible stores from a competitive disadvantage into a substantial advantage in store accessibility for this market segment by effectively re-defining the concept of a store.

All in all, an awesome demonstration of the power of “place. 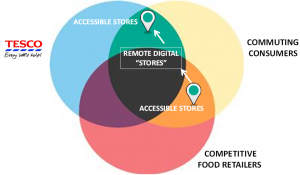 While Tesco’s innovation may not seem relevant or achievable in your market, there are still important lessons here that can be applied more broadly.

"Place" is about access. Your business grows when you reduce time and place barriers to access more effectively than your competitors.

So, how do you compare to your competitors when it comes to access? How do your customers evaluate your place and service strategies?

There is power in place. Leverage that power by regularly asking customers about access and thinking creatively about closing access gaps. It can be a real differentiator.

So, distribution is way more fun and impactful than you think! Keep your eyes open for ways you can out-access the competition. 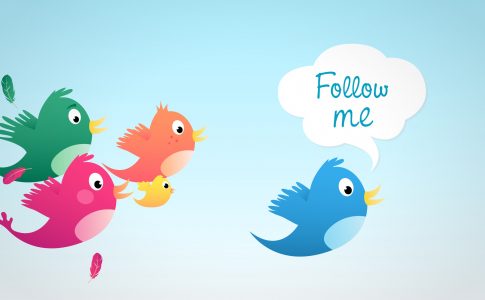 How Do Influencers Impact Our Choices and Language? (…and Twitter Bingo) 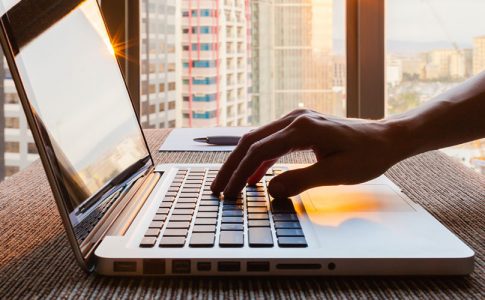 9 Agency Blogs You Should Be Following