The Student Choice: How do Ivy League, Private, Public, and Community Colleges Stack Up?

College enrollment is competitive. Many institutions are experiencing flat or decreased student enrollment. At the same time, their debt is increasing.

With increasing tuition rates, part-time options, specialized programs, and online universities, the choice of what to do after high school graduation has only gotten more complex. Students have options.

In response, admissions teams are taking all sorts of measures to attract new students and stand out from their competition. Some are even going as far as hand delivering acceptance letters and spending millions on modern facilities.

Do tactics like these really impact a students’ decision to apply and enroll? Before spending money on student perks and impressive buildings, let’s take a closer look at how prospective students make enrollment decisions.

Using our choice visualization and analytics software, we asked 301 prospective and current college students which factors are most important to them when choosing a school and how different options stack up.

Respondents reported that “high-quality school�? and “will help me get the job that I want�? were the most important factors when evaluating a school, coming in above “small class size,�? “tuition cost,�? and “lots of majors and programs to choose from.�?

This focus on future career viability was also reflected in the type of programs and majors students selected. In fact, 18% of respondents plan to major in healthcare, an industry with a mere 0.4% unemployment rate and a projected growth of 6.7 percent from 2012 to 2022. Another 16% plan to study science, engineering, or technology - more fast-growth industries with good prospects for well-paid jobs for graduates.

Interestingly, 49% of respondents reported that they are considering graduate education (another 29% said “maybe�?), suggesting that advanced degrees are associated with better job prospects as well.

Universities around the country are spending millions on modern facilities and student perks in an effort to attract enrollees. In fact, one study reported that facilities spending is one of the biggest reasons athletic departments run deficits.

These “construction binges�? have been a growing trend among most colleges for quite some time – sometimes known as an Edifice Complex or Taj Mahal Syndrome. At four-year public universities, debt increased 67% from 2000 to 2011. At private schools, it increased by 62%. While perhaps not yet a crisis, this is a troubling trend.

In many instances, students are footing most of the bill. This has at least partially accounted for the increase in student tuition rates and therefore student debt. In response to this, students and their families are becoming more cost-conscious.

And while sometimes improvements are necessary to stay up-to-par, it turns out that fancy buildings and state-of-the-art facilities don’t make or break the decision-making process for future students. Across the board, soon-to-be-students associate “nice perks�? with all types of institutions except community colleges, and it was perceived to be of lesser importance across the board.

Where do students think institutions are spending their tuition money? Only 17% of students perceive higher education institutions to be allocating resources on efforts to keep tuition costs low for students.

Another 19% perceive a focus on hiring good quality teachers… and 53% perceive institutions to be spending money on facilities (for both recreation and academics). So it seems that institutions aren’t pulling the wool over the eyes of prospective students – it’s pretty obvious when spending results in hugely visible construction projects!

Last year, the Ivy League collectively accepted a mere 22,720 students, while community colleges across the country accounted for 45% of all undergraduates.

Clearly, for most students, there is a huge cost difference between these two options (not to mention academic exclusivity). However, respondents rated Ivy Leagues much higher when it comes to the two most important choice factors: “high quality�? and “will help students land jobs.�?

However, prospective students reported that neither option really aligned with their personal values. It’s possible that the Ivy Leagues’ highly selective nature and community colleges’ “come one, come all�? policy mean that the majority of students have trouble identifying with either.

Interestingly, prospective students didn’t see any strong advantages of Ivy Leagues over other private four-year colleges. Neither were associated with being “close to home�? or having “low tuition,�? and both did fairly well on respondents’ top two choice factors discussed above. 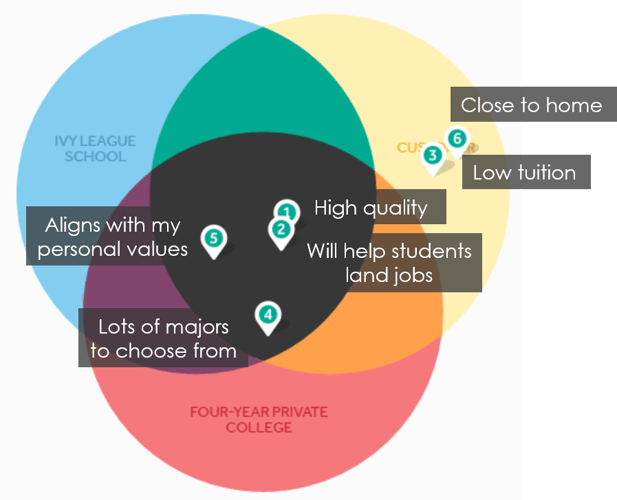 Respondents also believed that Ivy League and private schools essentially tie on fit with personal values and variety of majors/programs to choose from.

While public and private colleges tie on the most important choice factors, public universities tend to win on two key choice factors: “close to home�? and “low tuition.�? This can give them a significant edge when attracting students. 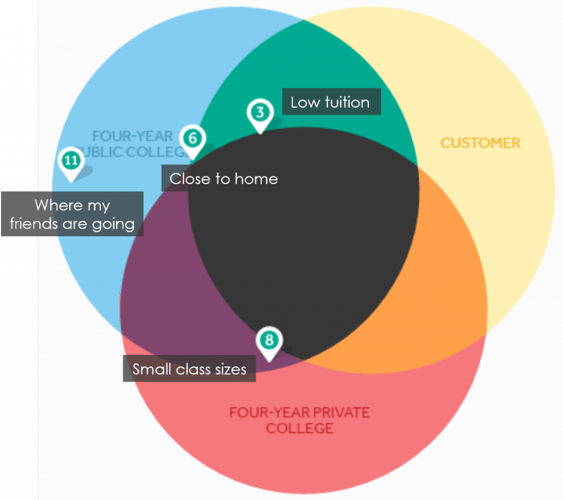 Respondents reported that most of their friends were planning to attend public colleges, but they perceived private colleges to have smaller class sizes and nicer perks. However, none of these factors were key drivers of student choice to enroll.

With an increased focus on education value and tuition costs, perhaps the most competitive comparison is the four-year program vs. the community college.

The perceived competitive advantage of four-year colleges is clearly the quality and likelihood of obtaining their desired job after graduation. However, community colleges win when it comes to proximity to home, low tuition, and small class sizes.

Students Focusing on Their Future

While four-year schools are clearly perceived as having better perks (facilities, dorms, computer labs, etc.), this is not a strong driver of student choice compared to many other factors. Therefore, if the goal is to increase student enrollment, institutions should dig into the drivers of their own student choice and perceptions of key competitors before investing millions in facilities improvements.

Whether it’s a four-year private or public institution, an Ivy League school, or a community college, students have their eyes set on their future. While nice dorms and a beautiful quad certainly add to the college experience, students are basing their decision on whether the college or university will support them in reaching their future professional goals. 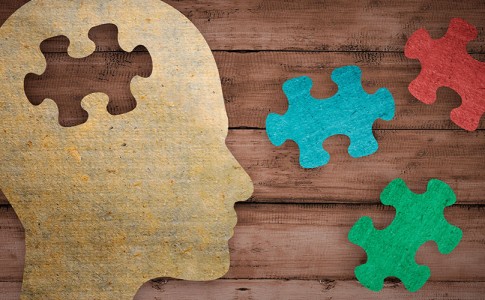 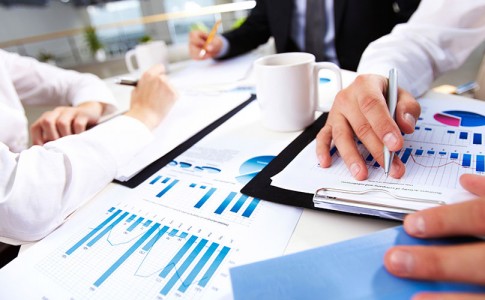