While 75% of Americans listen to music online, most have so far been unwilling to pay for the service. According to the 2015 Nielsen’s Music 360 report, consumers report that they are hesitant to subscribe to services because of the cost and the availability of free alternatives.

To many people’s surprise, when the free trial of Apple Music ended last month, 6.5 million subscribers decided to pay to continue. This week marks the launch of YouTube Red, another paid service. These two platforms enter an already competitive market that includes Pandora, Spotify and the struggling Tidal.

Only 9% of consumers in the Nielsen study reported that they are likely to pay for music. Clearly, these subscription services are betting that the overall number of consumers willing to pay for music will grow quickly, and a survey of about 300 folks Vennli conducted last week suggests this may be the case. Our findings indicate nearly one in four listeners (22%) currently using a free music streaming service plan to switch to a paid model. That presents a great opportunity for these services to capture new consumers!

To do this, they need to know what drives consumer decisions to subscribe to music streaming services. What is important to them, and how do they perceive the different options available to them?

Vennli’s survey homed in on what impacts consumers’ decision to choose one music streaming service over another.

The biggest drivers of consumer decisions to pay for music streaming services are ease of use and large music selection (and the latter could become particularly important in a crowded space where no platform is able to get every artist on board).

These important decision factors are followed closely by the ability to play specific tracks on demand, save favorite songs, and discover new music. Consumers largely don’t care if musicians get fairly compensated or if the service is championed by celebrities (sorry, Tidal). They also don’t make decisions based on whether radio and podcasts are included or if they can see what their friends are listening to.

In general, consumers want something that’s free or has low subscription fees, offline capabilities, and no commercials. And while many premium models tout at least some of these features, they were largely considered unmet needs across the board.

Some interesting differences in preferences and perceptions existed between segments of consumers. For example, older consumers and those who have been listening to streaming music for 4 years or more thought that fair musician compensation was highly important, but millennials disagreed. This suggests that messaging targeted to specific customer segments will be most effective for all platforms.

We found that none of the major competing music subscription services stand out as meeting these consumer needs across the board. In fact, it seems that consumers see a crowded, fragmented market with little meaningful differentiation.

This presents a huge opportunity!

For example, while 96% of consumers believe it’s important for a music streaming platform to have a large music selection, neither Apple Music nor Spotify nor YouTube are perceived at performing particularly well on this factor. The first service to properly message their offering as having the most extensive song selection could gain a significant advantage in the long run.

When the consumer research results are mapped onto the vLens market visualization, the insights reveal what these competing music streaming services need to do to win over new subscribers. Each of the colored zones on the vLens has implications for developing strategy to win the choice of consumers. The goal is to build and defend the Green Zone while neutralizing the Orange Zone of each competitor. 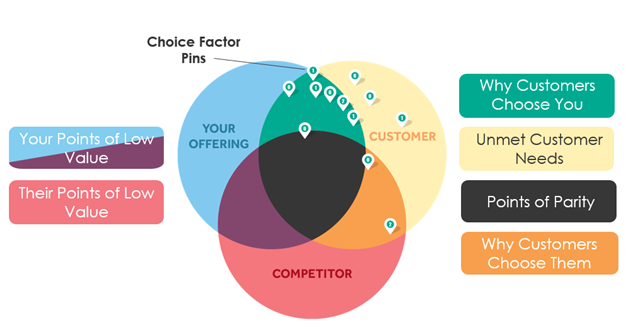 Here’s where each key player in the space is winning… and losing:

Apple Music’s biggest perceived strength is the fact that it integrates with consumers existing music library. When it comes to competing against Pandora, consumers like how they can select specific tracks on demand. However, Spotify, Pandora and YouTube win over consumers with their freemium model. 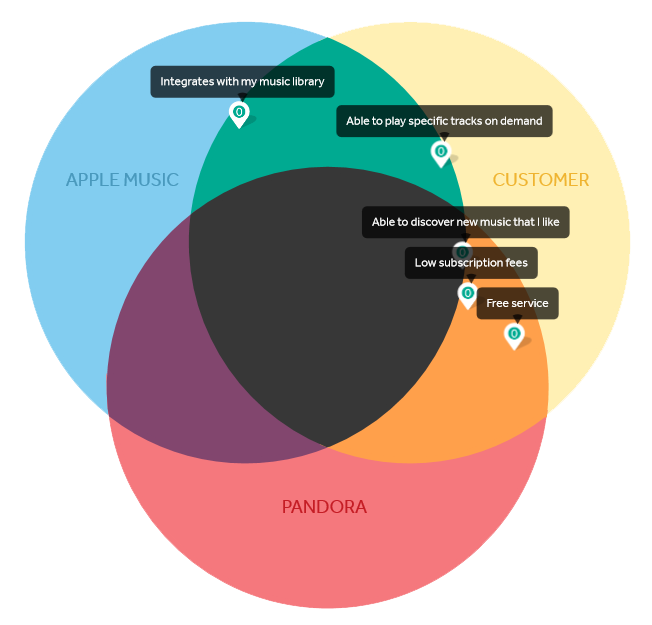 Not surprisingly, those respondents that currently use other Apple products were a bit more likely to use Apple Music and prefer it, but this didn’t influence decisions too much. Similarly, those that listen to music primarily on their mobile phones were slightly more likely to prefer Apple Music, which is likely due to the fact that the app is automatically downloaded on Apple phones.

To compete, Apple Music should focus on associating their brand with key “up-for-grabs�? customer unmet needs: commercial-free and offline listening capabilities. Even though a paid subscription for several of these services offers this functionality, consumers don’t recognize this, so Apple has the opportunity to capitalize on that and capture these features in the eyes of consumers.

Pandora loses to Apple Music on a couple of high importance issues: the ability to play specific tracks on demand and saving users’ favorite songs. However the two offerings are much more clearly differentiated than either Spotify or YouTube, suggesting that competition for users might not be as fierce between Pandora and Apple Music. 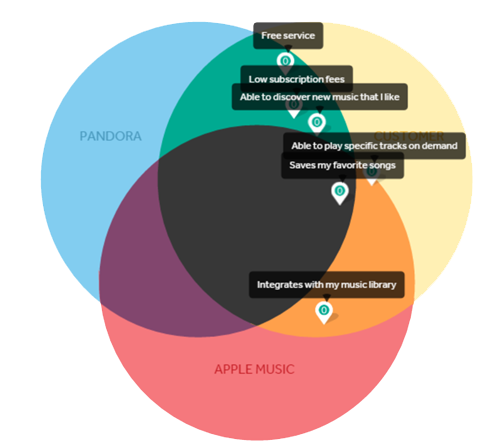 Spotify is fairly undifferentiated from others when it comes to important factors such as price, ease of use and music selection. In order to compete, they need to play up their perceived strengths – namely, the ability to better target the type of music users want. 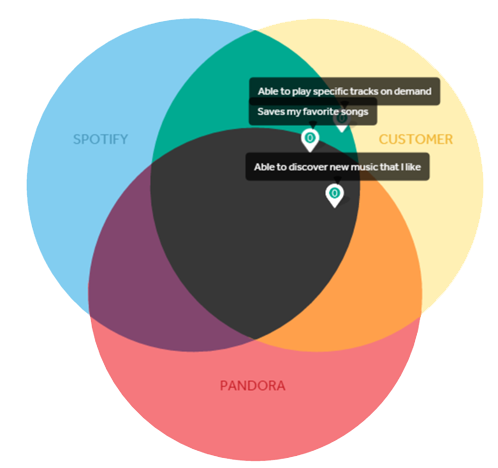 As YouTube launches a new paid subscription service, they’ll need to carefully position how they are better than other competing offerings to consumers. Right now, they win consumer choices primarily because of their free services, but they also lose because of the presence of commercials. A paid but commercial-free offering won’t necessarily be enough to get consumers to switch – they’ll need to see more value on other factors important to their choice.

When facing off against another newcomer, Apple Music, YouTube is going up against a service that integrates well with many people’s existing music libraries. YouTube Red will need to play up the value of listening to specific tracks on-demand and music discovery. 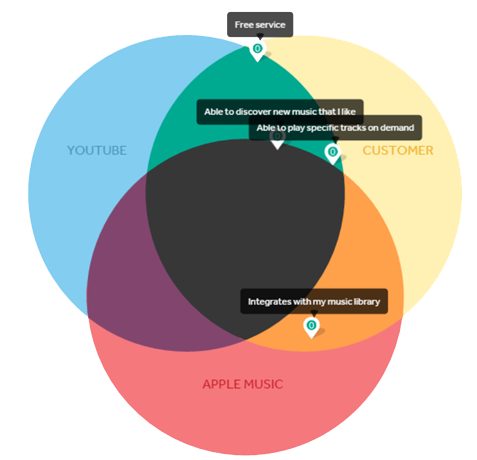 Tidal has based their entire value proposition around factors that are not as important to consumer choice: celebrity endorsement and fair compensation for musicians. They have their work cut out for them if they hope to compete in this crowded market. In fact, even those that say they currently use or have used Tidal in the past show preference for the competing services instead.

However, their recent Tidal X concert has been lauded for its unique twist on what a music streaming service can provide listeners, indicating they may be able to establish a strong niche. 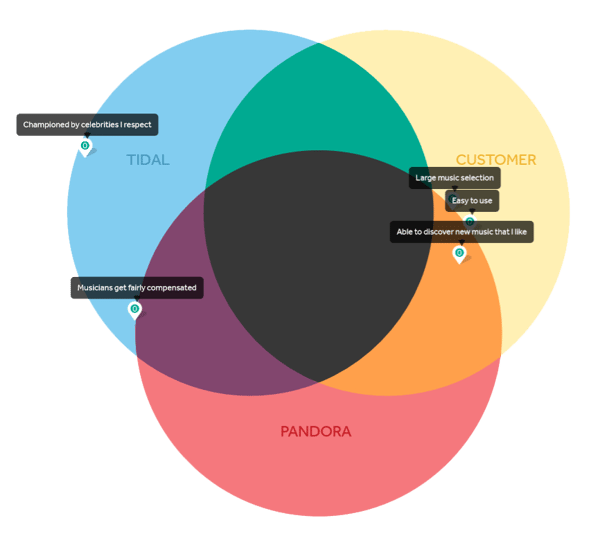 Differentiating to Win the Consumer Choice

In order to persuade consumers to pay for streaming music when free alternatives exist, each music subscription platform must understand where they win and develop a strategy for building their competitive advantage.

It will be interesting to see how YouTube differentiates their new offering, and if they did their homework when it comes to what customers value and how they make purchase decisions.

** This post is not an exhaustive account of the insights learned from this study. If you want to learn more about Vennli and these results, just get in touch with us! 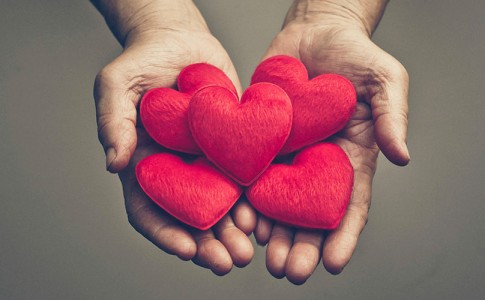 Customer Love Is Not Unconditional – You Have To Hustle